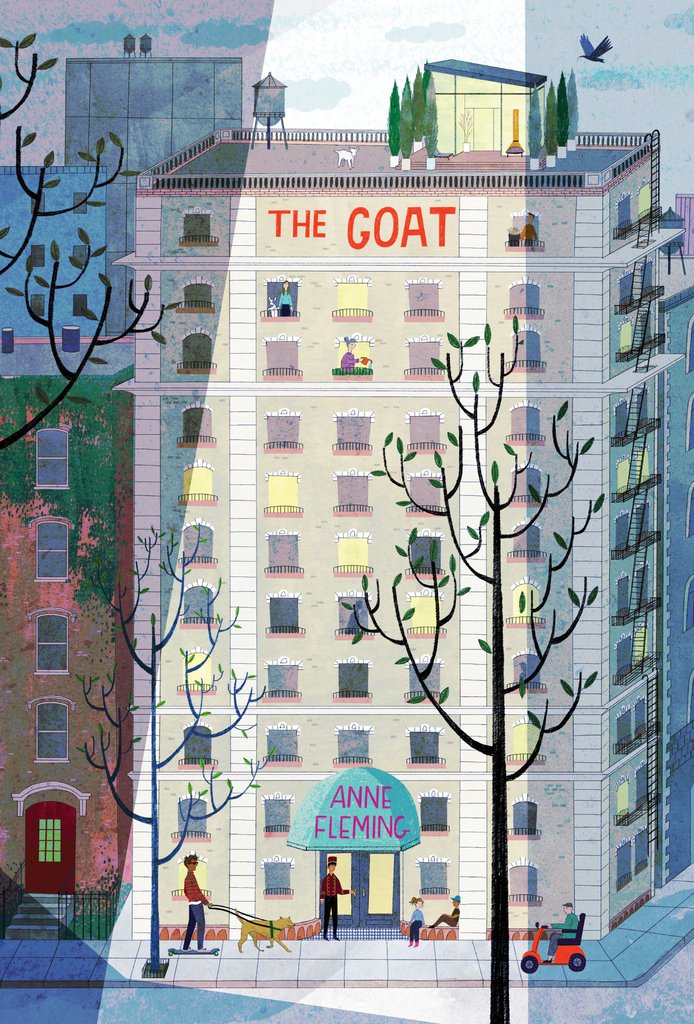 When Kid accompanies her parents to New York City for a six-month stint of dog-sitting and home-schooling, she sees what looks like a tiny white cloud on the top of their apartment building.

Rumor says there’s a goat living on the roof, but how can that be?​As Kid soon discovers, a goat on the roof may be the least strange thing about her new home, whose residents are both strange and fascinating.​In the penthouse lives Joff Vanderlinden, the famous skateboarding fantasy writer, who happens to be blind. On the ninth floor are Doris and Jonathan, a retired couple trying to adapt to a new lifestyle after Jonathan’s stroke. Kenneth P. Gill, on the tenth, loves opera and tends to burble on nervously about his two hamsters — or are they guinea pigs? Then there’s Kid’s own high-maintenance mother, Lisa, who is rehearsing for an Off Broadway play and is sure it will be the world’s biggest flop.​Kid is painfully shy and too afraid to talk to new people at first, but she is happy to explore Manhattan, especially the Metropolitan Museum of Art and Central Park, where she meets Will, who is also home-schooled and under the constant watchful eye of his grandmother. As Kid and Will become friends, she learns that Will’s parents died in the Twin Towers. Will can’t look out windows, he is a practitioner of Spoonerism, and he is obsessed with the Ancient Egyptian Tomb of Perneb.​When Kid learns that the goat will bring good luck to whoever sees it, suddenly it becomes very important to know whether the goat on the roof is real. So Kid and Will set out to learn the truth, even if it means confronting their own fears.​​​​

“The convoluted, intricate tale is filled with joy, sweet sadness, and a triumph of spirit. Lovely.”

"With delicate insight and humor, Fleming cleverly unites people — and goats — from vastly different walks of life in an offbeat celebration of courage and individuality."