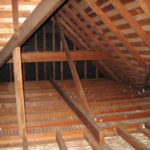 On the third floor of the house I grew up in were three rooms. There was my mother’s sewing room on the east side, a bathroom with a clawfoot tub next to the landing where the cedar chest stored our winter things, and a large bedroom on the west side that housed, when we were young, a series of Québecoise and foreign students, who received room and board in exchange for childcare and help around the house. There was Maude, whom my mother thought was gloomy, and Lucille, who was lively, Mila, Sachiko and Atsuko. We were to give them their privacy, so we did not go up to the third floor much. Only when invited. I remember one time Sachiko invited us up and showed us rice paper, only she did not tell us it was rice paper, only that it was paper you could eat. She made cranes out of it. We did not eat it, though I wanted to try.

My mother’s sewing room had a narrow walk-in closet where little-used items were hung in garment bags on the clothesrail — old dresses Mom did not want to get rid of, a tuxedo of my father’s, that sort of thing. If you pushed between these garment bags, you found a small door, about two feet by three. Through this you could go into a crawl space among the rafters. I must not always have known about this space because I remember the sense of wonder I felt upon finding it. And yet there was nothing to do in there except step from one rafter to the next. It could not be used for hide and seek because it was never in bounds. I wanted some day to take a candle in there and a square of plywood and a cushion and something to read, so as to be like children in books, but I never did.

It was impossible to find a door at the back of a cupboard and not think of The Lion, the Witch and the Wardrobe. I never thought: oh, on the other side of this door will be a whole different world. And yet to go through that doorway was to pass out of our world, if not into a new one. There was a magic in floorlessness, in unfinishedness, unlightedness.

I am teaching a course on writing fantasy, though I have never written any. I read it, though. Not exclusively, not even a ton, but enough — and with enough respect and admiration — that I think I can teach it okay. For an exercise on the first day, I had people make a list of portals they have known. Real-life portals. One of the books on the reading list is Hiromi Goto’s Half World. The portal there is a door that opens off the tunnel on the Cassiar Connector, the on-ramp to the Trans-Canada Highway off of Hastings Street, not far from where I live now. Once through the portal, the protagonist has to walk across a bridge made of crows, like the crows flying east each evening from Vancouver to Burnaby. I love that the fantastic speaks to the everyday magic of geography, of those doors in the tunnel, the strip of crows in the sky.

For a long time, when I thought about writing a fantasy, I thought I would use that attic portal in the back of the closet off my mom’s sewing room. I just could never get a vision of what the portal would lead to. It wasn’t connected to another house, like the attic in The Magician’s Nephew. It would not lead you to a forest full of pools. The ravine behind our house we didn’t need the attic to get to — you just walked down the back yard and there it was. My imagination stopped in the room itself — a sharply pitched roof-inside, evenly spaced rafters, a triangle-shaped tunnel, wooden.

This time as I did the exercise along with the students, I added other portals. The green tube that led to green undergrowth caves in the ravine. The ravine itself, I mean the stream, the sewer part that ran under Blythwood Road, before the entrances were closed off with big metal rails. The tunnel was a big concrete O inside which the shallow stream made a ribbon down the middle.  That you could go through and imagine coming out somewhere different. Even the other side of the ravine seemed transformed by the route we had accessed it, the long tunnel, dark and echo-y and thick with odour, a smell that I once described in a poem as “copper and old poo.” The park on the far side was brighter and greener after that tunnel, sweeter, more full of birdsong. Our voices were feeble. We might easily have been someplace new.

One winter we built a massive snow fort, with multiple rooms and tunnels running between them, that could have led us somewhere out of our ken.

Before it was renovated, the UBC library had these metals doors as in submarines. I remember them having rounded tops and bottoms, raised sills you had to step over, but I could be misremembering. Point is, they were notably narrow, notably portals, had notably two sides that might easily turn out to be radically different, two different worlds.

Why are portals so meaningful to us? There is often something magic about them, I mean the ones in the real world. We regularly cross thresholds to the unknown, even if it is only when we go to school for the first time or enter into another person’s home. There are rules to be learned, different ways of doing things, different air, different smells. The question “What’s behind this door?” always holds an element of mystery, even if we know what is behind the door. For children, what is behind closet doors changes at night, just as what is under the bed changes.